close
We've sent you an email with a link to update your password.

A password reset email has been sent to the email address on file for your account, but may take several minutes to show up in your inbox. Please wait at least 10 minutes before attempting another reset.

Registering for this site allows you to access your order status and history. Just fill in the fields below, and weâll get a new account set up for you in no time. We will only ask you for information necessary to make the purchase process faster and easier.

We cannot diagnose, treat, cure, or prevent any disease or condition. Read our Disclaimer.

What Customers Are Saying About Us

My husband has advanced dementia, since having the Tesla BioHealing Devices for two weeks, he has been putting on his clothes independently, has more clarity in thoughts and ideas, and has been sleeping better and sound!

The healing force of this little "can" is quite amazing. Just having it near me when I sleep I'm starting to dream again! I also have small cysts in my right breast and I swear they are disappearing in only 2 weeks. A miracle! It's next to me all day long and as I sleep! Thank you for such an incredible product. I can't wait to buy more!

Since I have been using the Tesla BioHealer, I’m sleeping less & feel rejuvenated upon awakening. This is unprecedented. I have needed a lot of sleep all my life & rarely felt rested & refreshed when waking up. I am now waking up before the alarm, not hitting the snooze button & exercising an hour before work.! I can’t attribute it to anything except the Tesla BioHealer. Thank you for this wonderful technology!

I have stage two lung cancer and decided to go a wholistic way of treatment. I used oils to bring my annuity up and green smoothies and changed my entire diet to greens fish and anything organic. No sugar or anything that turns into sugar until my body regected oils and smoothies. Then noticed my normally high energy flagging so I found you and thought you could help. I since have my energy back and opted to do three rounds of radiation to make sure I’m ahead of it and it remained the same for seven months with no growth.

I knew the bio beds would not be out any time soon...by all reports the bigpharma and government scum is keeping them from us. So I looked for Tesla healing and found this website.
I ordered the pet healing can for 14 yr old my cat, who has had multiple issues in the last couple of years, including 2 bad hips that go out independently all of the time and a high white blood cell count in his previous blood work. We ordered the can on 07/20/21 and received it promptly 3 days later. Today is 08/01/21. In one week of sitting the can next to him where ever he sat or slept he is walking better...and his hips rarely go out, he has been to the vet after a bout of diarrhea (manufacturer change of his regular food), we had started using the can 4 days prior to the vet appt. I took him to the vet on Tues, July 27, By that time his diarrhea was gone, bowel movement perfect, the vet did more blood work that came back the next day. She fully expected his white cell count to be high. Not only was his white cell count perfect but so was the rest of his numbers. They also did a quick glucose reading the day of the appt and that was normal at 110. The thyroid was perfect, etc etc. She was shocked...and I was elated! I told her nothing about the can...maybe I will when his hips are fully healed. He is feeling so much better that I am weaning him off of the steroid he has been on since they first discovered the high white blood cell count 6 months ago. :)
Additionally...I have a much younger kitty who came to us (showed up on our doorstep) about 3.5 yrs ago. She is approximately 4 1/2 yrs old. She has always had a problem urinating (bladder cysts apparently...that is what the vet said), she has been treated for a urinary tract infection twice and checked for kidney stones, but it never had long term relief for her. She was constantly looking to urinate somewhere, and if inside was always in the litter box. And she could only dribble. Natural supplements and other products only helped to a point, and then she would NOT allow a pill, chew, or anything else to be administered. This went on until we got the Tesla can. We watch who sits down and when, and we move the can accordingly. When the younger cat is sleeping or sitting somewhere we put it by her. She has since been peeing mostly normal. There is no more searching around the yard for a place to pee, or going to the litter box continuously when she is inside. Also, her mostly nasty demeanor toward the other cats is gone. She was always in pain and spatted and swiped at everyone (9 other cats). No more!! She is loving and tolerant of everyone. She even shows it in her eyes. She is a very happy and rested kitty. :)
Also, every cat loves to curl up with the can and take a nap! They even use it for a pillow.
This Tesla healing can is priceless and one of God's miracles. I recommend it to anyone looking to heal their pet and relieve their pain. I'm amazed...but not surprised at all. I had done a lot of research on the Tesla bio healing and fully expected the results we are seeing. We are soooo happy for our pets and our own health!
My husband has it in his arthritic hand right now. :)) 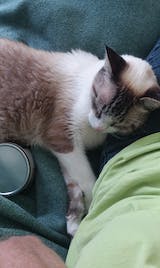 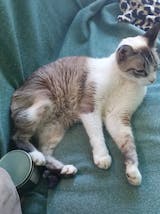 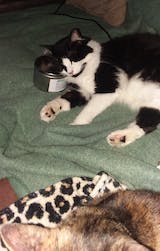